The year’s work and produce in the Borderland Garden 2014

I am pleased with the results from the Borderland Garden for last year.  Before I began to add up my figures I anticipated more time spent and less produce than there was.  In a perennial vegetable garden the harvests tend to come in relatively small amounts over the whole year and this year I harvested 22 kg.  For this harvest I worked for 59.5 hours.

This was the second year of gardening here.  The main perennial vegetable polyculture was re-located to make way for an extension to the house.  This accounted for about twenty hours of time and planting six fruit trees accounted for another six or so hours as the groyund is solid clay with embedded rocks.  There was no digging involved in the preparation of the polyclutre bed as this was “constructed” entirely above the existing ground level as detailed in my post of 2nd March.

The new bed gave an expanded growing area and the opportunity to add more plants.  The majority of these were transplanted from the Telford garden which (as regular readers will know) was sold (with its’ adjoining house) in November.  Hence a relatively large amount of time spent planting out and very little sowing seeds.  I will post the results for the Telford garden in due course, at present I can’t find the notes in the remaining post move muddle!

The tables below summarise the harvests and hours spent working in the garden.

The principles that I adhere to in this garden are as detailed in my book Edible Perennial Gardening – minimum time and effort, letting nature do as much of the work as possible, building fertility by adding biomass of all kinds as a mulch on the soil surface.

There is a long way to go before it is anything like as alive and fertile as the other garden became over the years, but I am very happy with progress so far.  Having a rich clay soil is of course a help in respect of fertility.  I noted that some of the small branches and twigs embedded in the polyculture bed have begun to break down as I could see the white mycelia coming from them.  But in other places, such as along the carrot and fennel “hedge” / edge plant material that I cut and lay down on the soil has been there without breaking down for months.  Clearly it will take time for the decomposer organisms to establish across the garden.

Here are some reminders of how the garden developed between March and September: 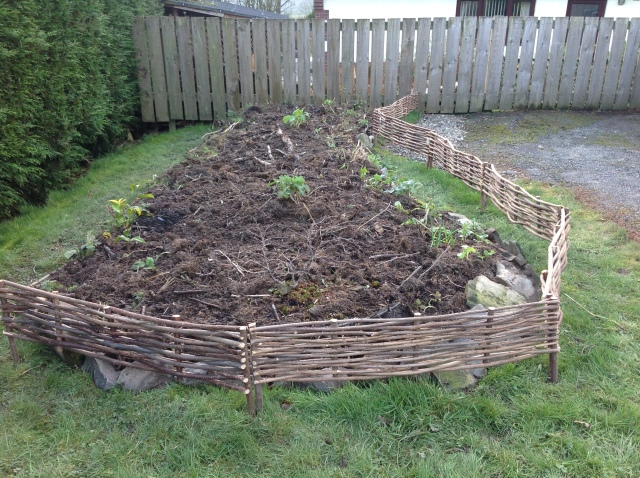 In my notes from last year – along with the details of plantings and times – I wrote: