Over the years I have discovered that gardening with perennials is about playing the long game, looking to the future and being patient.  You can’t have what you might want immediately, you may not be able to have it soon either, but with patience there is a good chance you will get it eventually.

I do plan things for the garden, but the plans are fluid and frequently adapted, depending on how things go.

I have one mixed bed of flowers, herbs, fruit and perennial vegetables that I call the triangle bed.  It is bordered on one side by the driveway and on the other two by paths to the house.  It is in a prominent place and I like it to look nice.  Generally I have not planned what to grow here and it has filled up with an eclectic mix of things, some planted by me and some by the wind.  This spring one edge looked like this, very cheery with early flowers of sweet cicely and forget me not.  Later on in spring I decided that for this year I would plant oca and mashua within the central area of the bed mainly as ground covers, allowing the mashua to sprawl rather than to climb.

However the soil is thin here and I have not improved it much at all yet.  As a result the oca and mashua got off to a spectacularly slow start, so slow as to be mostly invisible during the summer months.  I don’t have pictures for the central part of the bed that time as I didn’t want to record it not working out.

However what did work unexpectedly well was the lovely display of flowers, brought to the bed mostly courtesy of the wind. 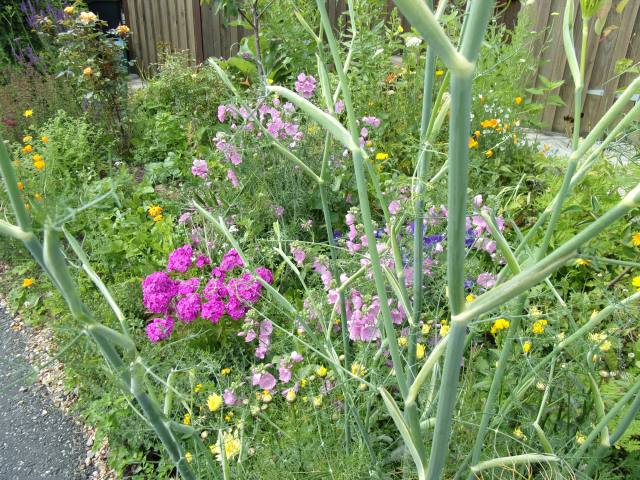 Lately however the oca and mashua have started to assert themselves.  It doesn’t matter to me that this hasn’t happened until now as they are not for cropping (at least not this year).  Both have demonstrated that they are reliably hardy over the winter in this garden so I shall just leave them in place.  Next year they should make a good ground cover in the middle of the bed and a harvest in the autumn or winter. 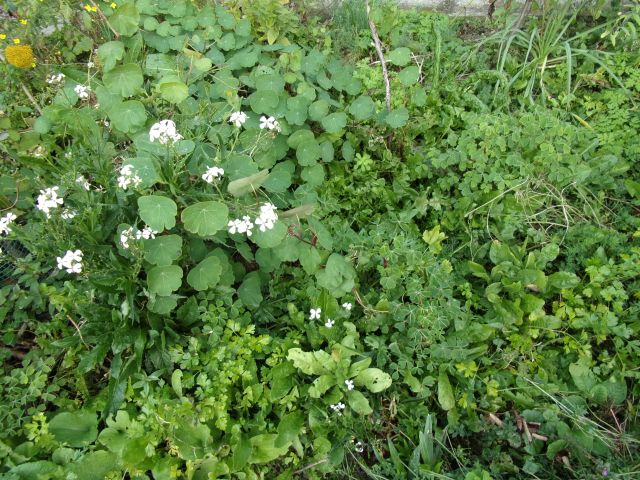 Another bed, that I either call polyculture no. 3 or the end bed lies across the garden encircled by lawn and backed by a hedge.  Like the other polyculture beds alongside it, it comprises branches and sticks from the roadside hedge, with upturned turfs and copious amounts of organic mulch derived from the garden.  This is often grass cuttings but also hedge trimmings, pulled up and cut off parts of plants.  I don’t have a compost heap as there is nowhere that is not clearly visible in the garden.  But I effectively stopped using one as the default option for organic bits and pieces years ago and have for a long time just put things down more or less where they derive from to decompose on the soil surface.

So this spring this bed looked rather bare and dull with a few tree onions and a bit of land cress round the side but I had hopes!

I planned to grow a variety of roots – skirret, salsify, Scorzonera and also I was very excited at the opportunity to buy ulluco tubers for the first time.  Planting them straight into this bed turned out to be a big mistake as only one grew and that was eaten down after a few weeks.  I don’t know what became of the others, whether they were eaten below ground before they had a chance to show or what.  Anyway, next year I will grow them in pots first.  I was just getting a bit cocky perhaps – oca and mashua can be left outdoors here and come up year after year so I thought it would be okay to plant ulluco straight out.  I think this was not very responsible as this is a crop not that widely available and I should not be trying to extinguish it.  To make it worse this bed then developed a truly massive crop of red veined sorrel – known in these parts of the Welsh border as Welsh dock – and truly disliked by the neighbours for its tendency to proliferate.

However as the year went on and I continued the mulching the red veined sorrel was virtually smothered out of existence.  The tree onion and some garlic also in the bed truly loved the deep rich soil that was developing and produced a marvellous crop.

I planted some spare beans along one side and at the end of the summer the only plant that had grown started to grow well and by the end of September was developing a good crop.  I had just let it grow where it wanted, not providing any support. I am leaving most of the beans to ripen so as to grow some more next year. 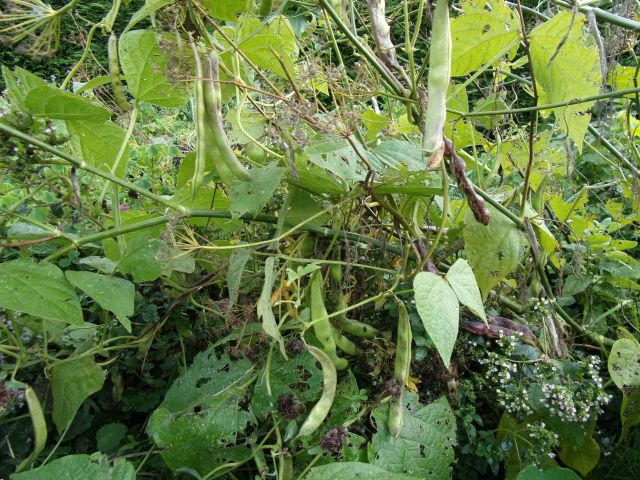 Through the summer plants that I put around the edge to demarcate the bed from the lawn put on a super show of flowers.  There are also Jerusalem artichokes and skirret to harvest sometime fairly soon.

And now as October wears on some more oca that I added belatedly (after the ulluco failed) has started to assert itself.  But as you can see there is still an area that is only mulched.  Next year I will think about what to do with it.  Plant some ulluco maybe?

oca and nasturtium on end bed with mulch behind