On or after the solstice is the time to prune fruit trees according the method I am following from Ann Ralph’s ‘Grow a Little Fruit Tree’ book.  So now time like the present – I have been in the garden this afternoon doing just that.  Some trees hardly needed any attention, some I could not decide and left them for the moment and others had quite a lot taken off.

Those I planted two years ago, before I bought the book, did not have the benefit of a very radical knee high first prune and therefore are considerably bigger than those that had the knee high treatment to start with.  Consequently they needed more pruning today.

If you look back to my post of 3 May, just a few weeks ago really, you will see how much growth it had made! 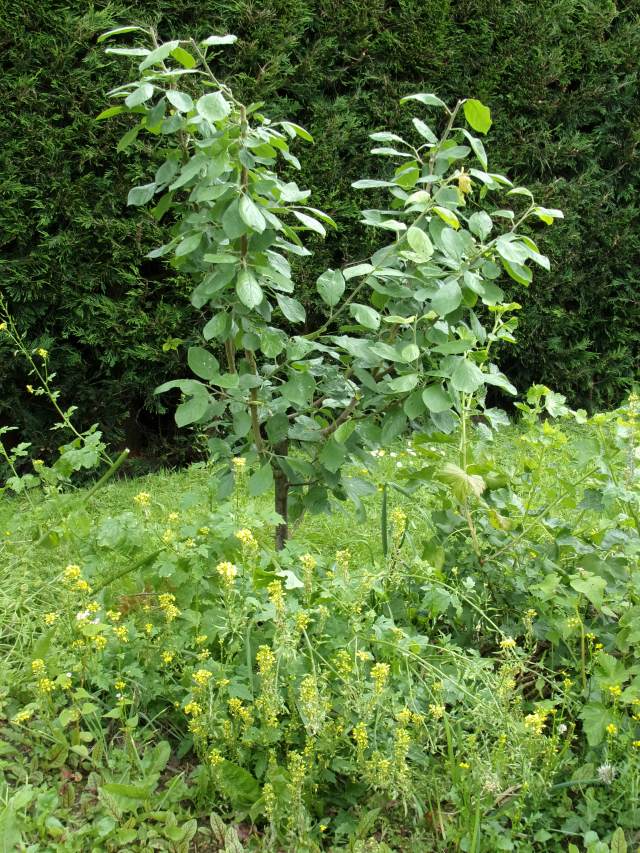 Similarly this apple has made a lot of upward growth in recent weeks, much of which I removed.

Whereas the other apple, planted at the same time, has already acquired a smaller stature / habit –

and did not need much removed.

The mirabelle, planted last year is much smaller and did not need much taken off.

My challenge with this one was that ideally fruit bearing branches should be at about 45 degrees to the trunk and this one has nearly vertical branches. 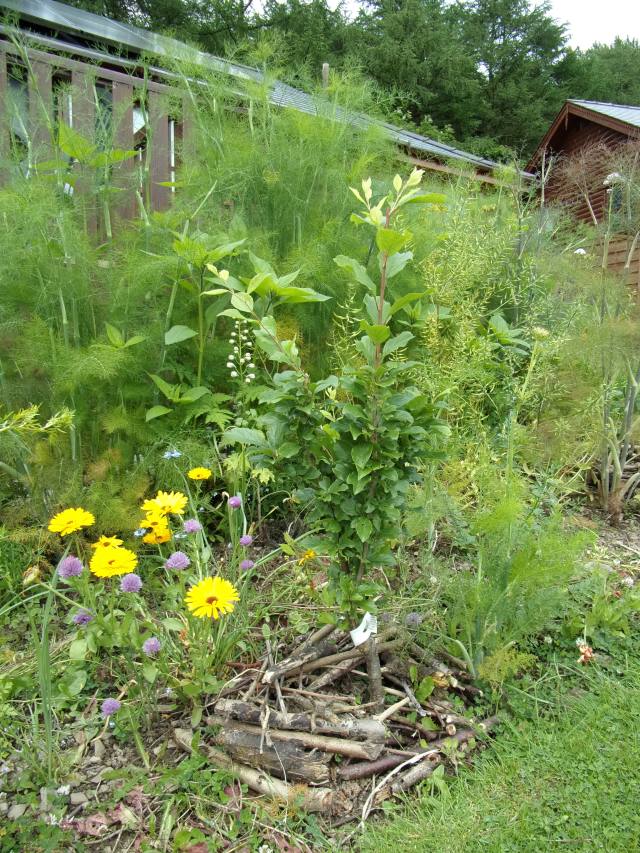 But I did manage to get some of the most upright branches out and leave some more angled ones.

Apple, sunset, has some small fruit and two cherries also have a few.  The rest are holding out until they are a bit bigger, but perhaps that will be next year for some of them.  But so far so good.  I am happy with all of my lovely tiny trees!

I love forest gardens and forest gardening, nature, reading and everything good about being alive. I have written two books - the garden of equal delights (2020) - about the principles and practice of forest gardening; and Edible Perennial Gardening (2014) - about growing perennial vegetables in polycultures, which is basically forest gardening concentrating on the lower layers.
View all posts by Anni Kelsey →
This entry was posted in Borderland Garden, forest garden development, Forest Gardening, Fruit, Fruit trees, Permaculture, Polycultures and tagged apple, mirabelle, plum. Bookmark the permalink.

4 Responses to Time to prune the tiny fruit trees