If you have read this blog before you will know that this year I have started a new garden this year, up in the hills on the border between Wales and England.  The general plan is along the lines of a mini forest garden with fruit trees and bushes inter-planted with perennial vegetables, herbs and flowers.  All sorts of climbers both edible and ornamental ranging through the hedge and assorted beds developing over time for more perennial vegetables and some experimenting with beans and grains with plenty more flowers sprinkled in as well.

This year the main priority has been to make room to accommodate as many perennial vegetables as possible from the other garden as the Shropshire house was due to go up for sale.  There have been constraints on time as I have had only short slots of time to work in – a few hours a week here and there.  Additionally because of the setting of the garden in relation to the property and neighbouring properties there has been a consciousness that at any one time it would have to look reasonably tidy.  This has meant that I could only bring very small patches into use at any one time, plant them up and move on to another small patch.  This is not the way to do something if you have a plan to stick to!

Arising from these constraints are three distinct and different rather ad hoc polycultures:

I can’t pretend that any of these patches are in any way orthodox but now I have the time to sit down and think about it, I can itemise what is where and see how many of the elements that I would want to include in a polyculture have actually arrived in each of these.  Off the top of my head here is a list of the plants in these patches, a note of their function in a polyculture and my reason for planting them.

That’s quite a range of perennial vegetables, fruits, flowers, herbs and other plants!  The various plants also fulfil a range of functions; in particular there is lots and lots of provision for insects, the garden has been humming and buzzing all the summer!  Mineral accumulating plants are missing and I will probably allow nettles and dandelions (I have just been told as long as they don’t show) in for that function in future.  There may be need for more nitrogen fixers and the placing of different elements could arguably be better done in the hedgetable patch and the flowery border.  However, given that it all just evolved as the summer progressed I am pleased.

The ‘main patch’ has been intensively mulched, mainly with lawn cuttings and hedge and tree prunings because that is what the garden generated.  I have a philosophy of not importing fertility to the garden and also not exporting potential fertility (to the council green bin or tip) and just re-use it as directly as possible.  For aesthetic reasons I don’t have a cmpost bin or heap in this garden and so the easiest thing to do with lawn cuttings was to put them on the vegetable patch.

I don’t know if this mulch is the reason for the extraordinary amount of growth the plants in this patch have put on but here are some pictures to illustrate the change in a few short months.  Of course I have yet to harvest the main crops from below ground, and that will be the proof (or otherwise) of what I have been doing.

This is the main patch on 10 June  – oca, yacon, Jerusalem artichoke and mashua are small plants at the back.  Lots of grass cutting mulch all over, using sticks from hedge to form an edge.

With more mulch on 28 July – plants at back growing well, potato, beans, burdock, gladioli coming on at the front.  More mulch and more twigs and branches being incorporated.  Black plastic is next door. 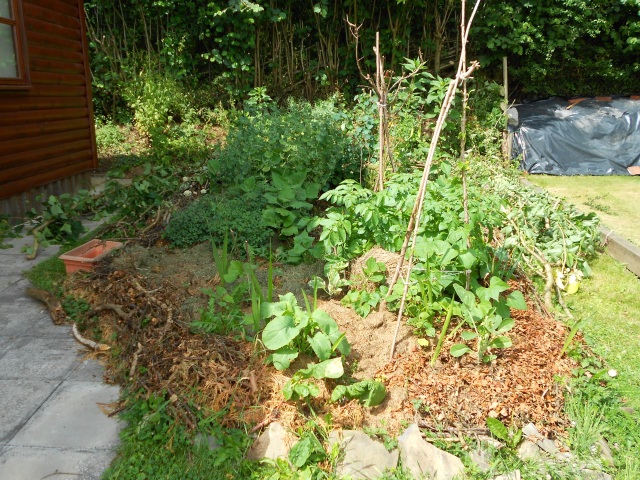 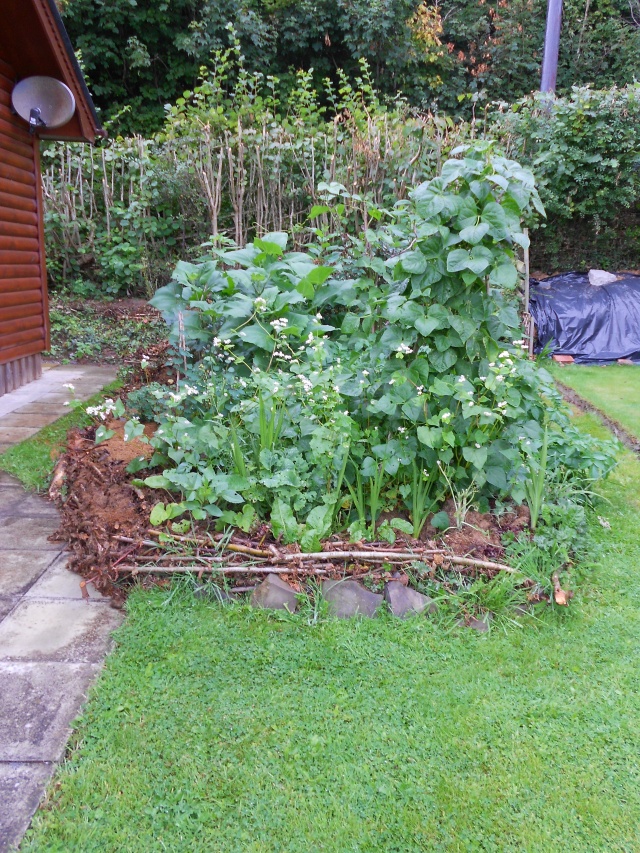 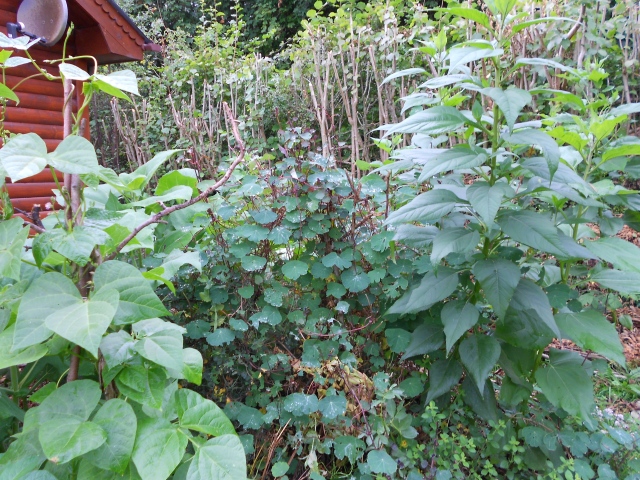 The progess of the hedgetable patch from June

to August…. quite full of smallish plants, but they are healthy and growing despite unimproved soil. 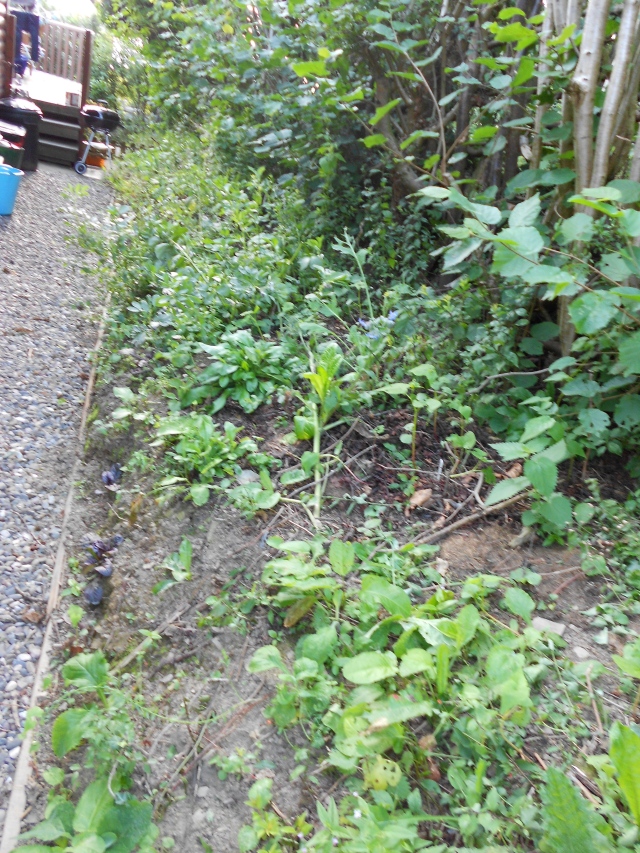 and finally the flowery edge this week 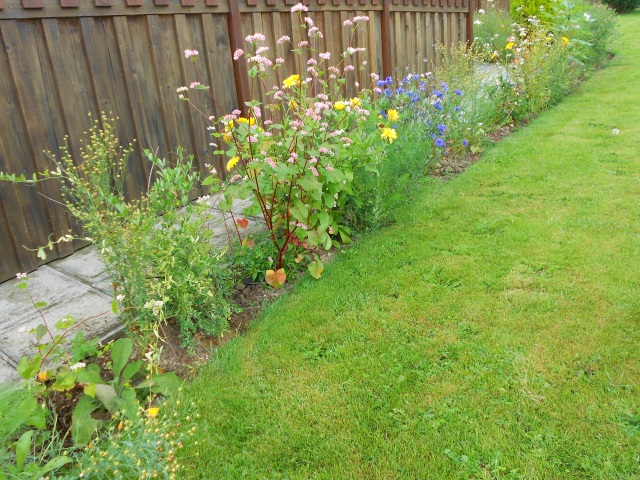 I love forest gardens and forest gardening, nature, reading and everything good about being alive. I have written two books - the garden of equal delights (2020) - about the principles and practice of forest gardening; and Edible Perennial Gardening (2014) - about growing perennial vegetables in polycultures, which is basically forest gardening concentrating on the lower layers.
View all posts by Anni Kelsey →
This entry was posted in Borderland Garden, forest garden development, Forest Gardening, Perennial Vegetables, Permaculture, Polycultures and tagged burdock, jerusalem artichoke, mashua, Oca, wild rocket. Bookmark the permalink.