Cooking from the garden – roasted perennial (and other) root veggies

A large part of the value and purpose of my experiments with perennial vegetables is to make the most of my garden by producing food that is easy to grow, lasts year after year – and very importantly – tastes good!  I have used perennials alongside other veggies in salads and cooked meals but generally have not had sufficient amount and variety at any one time to form the basis of a substantial dish.  However for some weeks I have been aiming to concoct a roasted root vegetable dish using as many roots from the garden as possible.

Yesterday I set about garnering as much produce as I could for this purpose.  I went for the Jerusalem artichokes first and dug one plant that grew to a great height last summer – albeit at something of an angle due to its shady position.  This yielded 390 grams after removing part of two tubers that had sadly rotted.  This part of the garden is always very damp – so damp I think that there may be water rising there, so I know now not to leave Jerusalem artichokes in there too long if I put them there again.

Amongst the Jerusalem artichoke tubers were a few Chinese artichokes that had wandered over – they are part of the mint family and spread underground like mint does.  I dug up a skirret plant and took off a number of roots to eat and also another five to replant.  I put the original plant back where it had come from, noting that small green shoots are starting to form and planted the five roots elsewhere, hoping to make five more plants, but not knowing if this will work.

I have a few beetroot plants which I am inordinately proud of as most annual veggies just get slaughtered by the slugs.  I pulled two of these and also gathered some apples from the ground.  Shamefully they have been lying there since last autumn, I assumed they would have been nibbled or started to rot, but surprisingly I found quite a few that were whole and wholesome.  To add some greens to the meal I gathered some shoots from Asturian kale, 1000 headed kale and Sutherland kale.  Sorry about the glove in the picture below, I have tried to crop it but can’t get that to work. 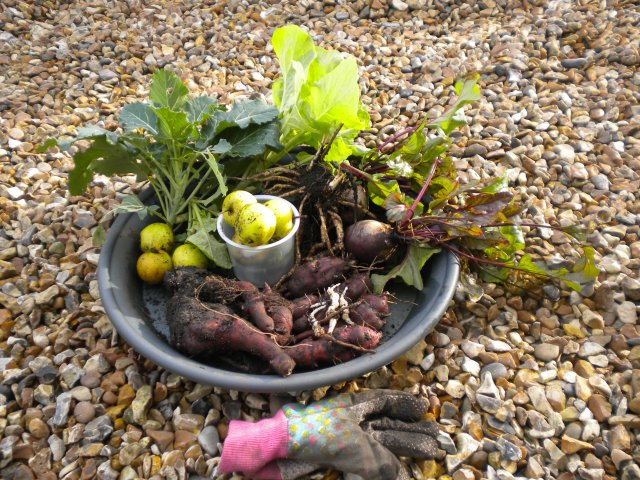 The recipe is based on one in Hugh Fearnley-Whittingstall’s veg cook book, but starring the perennial roots from the garden:

The veggies were all cleaned (and peeled if necessary) and chopped / sliced into appropriate sized pieces.  Then they were put onto two trays with a dash of oil and a sprinkle of salt and freshly ground black pepper.  After 20 minutes at 180 degrees C the apple and a good handful of rosemary leaves were added.  Then back in the oven for another 20 minutes or so until cooked.  Roasting works really well to bring out the flavours of the veggies and there is no need for any additional flavourings.  We cook two portions of roast veg in order to use half another day mixed with cooked brown or green lentils and a salad dressing to make a really amazingly tasty salad dish.

I guess the list of ingredients above demonstrates that using what is to hand to make supper gives a less finely tuned recipe than one from a cook book but the satisfaction is immense both for the tummy and for the soul.

I love forest gardens and forest gardening, nature, reading and everything good about being alive. I have written two books - the garden of equal delights (2020) - about the principles and practice of forest gardening; and Edible Perennial Gardening (2014) - about growing perennial vegetables in polycultures, which is basically forest gardening concentrating on the lower layers.
View all posts by Anni Kelsey →
This entry was posted in Forest Gardening, perennial greens, Perennial Vegetables, Permaculture, Polycultures, roots and tubers, Telford Garden and tagged Chinese artichoke, jerusalem artichoke, kale, mashua, Oca, skirret. Bookmark the permalink.