Yesterday I was pruning shrubs.  I was doing this on the day in July six years ago when I first discovered forest gardening.  That day the mountain of shrubby debris created led me to ponder what it would be like if all the vegetation in the garden was edible.  Later when I did a web search it came up with forest gardening!

I  was already not that happy about taking prunings etc off site to the local council recycling centre because I did not want to export potential nutrients out of the garden.  However I usually did so as there is not much space here for composting.  Once I had learned of forest gardening and read up on the various ways that nutrients are built up in the soil I have never exported any green material out of the garden.  Indeed I am very unwilling to part with any potential nutrients that could go to benefit the garden.

Vegetable peelings etc together with some cardboard and some shredded paper and the occasional cotton or wool item go in the compost bin.  As far as possible I leave “weeds” that I remove on the soil surface as near as possible to where they were growing where they rapidly decompose.   Larger bits such as shrub prunings are cut up (just with secateurs) into six inch or so lengths and spread around as a mulch.  It does take time, but on a lovely summer’s day in the garden what does that matter?

Yesterday I chopped some of the prunings and spread them mainly round the oca that is growing in one of the perennial polycultures.  I learned when I grew oca for the first time last summer that they eventually become quite chunky plants and have a tendency to topple about a bit.  I have in the past used lawn cuttings to “earth up” round potatoes and this is similar.  I put the mulch mainly round the plants that are at the least fertile end of the patch hoping that they will also gain some fertility from this.

Doing this might perhaps suggest that I am giving an open invitation to every slug in the neighbourhood to come and party in the damp darkness piled around my precious plants, but my general  observation is that it has seldom caused a problem in the past.  If an invasion of slugs did arrive I would remove the mulch immediately.  This year there have been at least thee daddy blackbirds on regular patrol in the garden and I have seen them attacking slugs with their sharp, pointy beaks and stabbing ferociously.  They often come quite close now when I am in the garden, maybe they are hoping for a snack.

The abundant growth in the most heavily mulched areas testifies to fertility building up over time.  It also seems to happen quite rapidly so I am assuming that there is a lot of help at hand with the many different types of soil life that work on decomposing organic matter.

I am happy with my (somewhat unorthodox) means of disposing of shrubby debris as it removes the need for transportation to take it off site and uses only moderate energy on my part to benefit the garden markedly.  On the down side, there could be slugs and it wouldn’t please people who need their gardens to look aesthetically amazing at all times.  I took these pictures yesterday to show the general effect.  On the first you can see (particularly if you zoom in) the pyracantha cuttings between the oca plants, on the second there are yew tree clippings around the base of the Jerusalem artichokes and on the third some more hebaceous bits – chicory and dandelion beside an oca and kale which are snuggling up together.

I promise to put the outcome of this on a future post, to show how quickly this all decomposes and how the veggies I have mulched fare. 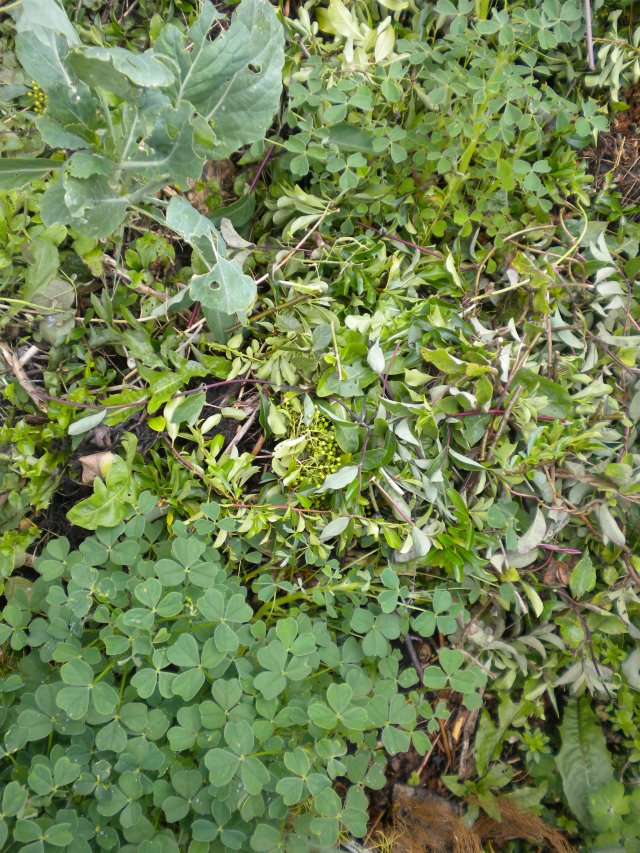 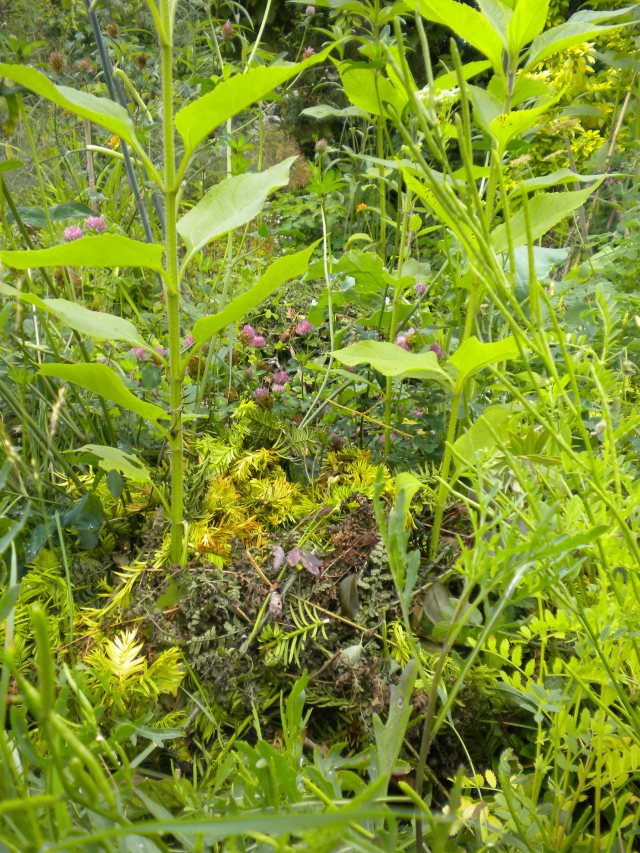 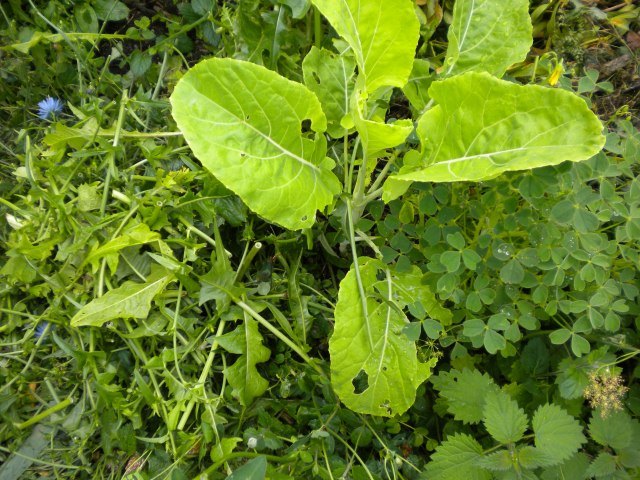 I love forest gardens and forest gardening, nature, reading and everything good about being alive. I have written two books - the garden of equal delights (2020) - about the principles and practice of forest gardening; and Edible Perennial Gardening (2014) - about growing perennial vegetables in polycultures, which is basically forest gardening concentrating on the lower layers.
View all posts by Anni Kelsey →
This entry was posted in Forest Gardening, perennial greens, Perennial Vegetables, Permaculture, Polycultures, roots and tubers, Telford Garden and tagged kale, mulch, Oca. Bookmark the permalink.